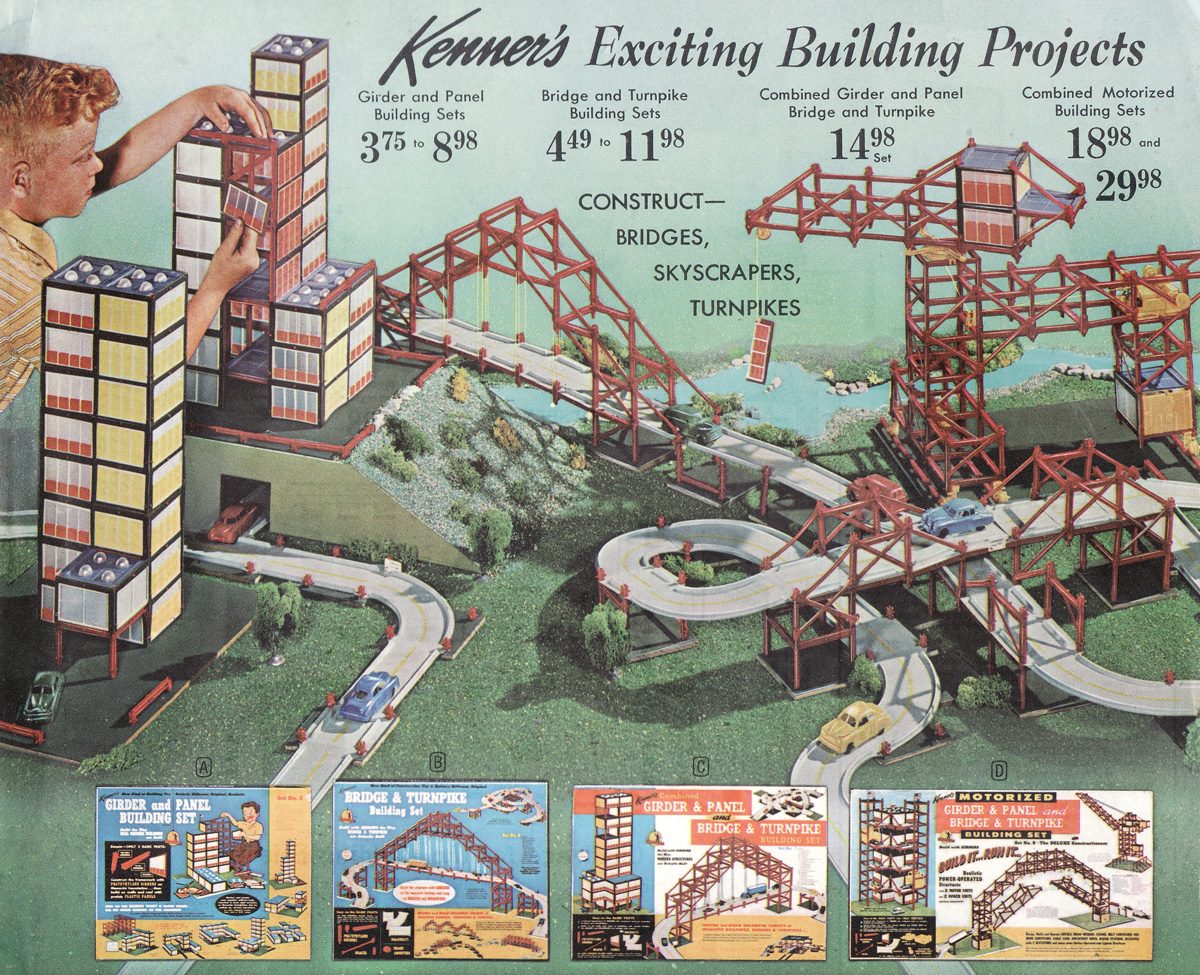 There are 32 pages of Christmas toys in the 1962 Eaton’s Christmas Catalogue. Today we look at some of them. We’ll cover some more in a follow-up post.

Building sets, whether interlocking blocks or logs, or metal pieces that could be connected using tiny nuts and bolts were as popular then as they are now.   The Kenner building sets shown at the top of this page featured girders that interlocked to build bridges and buildings. They ranged from $3.75 to $29.98. That would be between $30.45 to $243.44 in today’s dollar. Kenner traded hands a few times finally ending up owned by Hasbro Toys. Hasbro shut it down in 2000. Bridge Street Toys of Boston resurrected girder and panel building sets in 2005 but they closed in mid-2106. 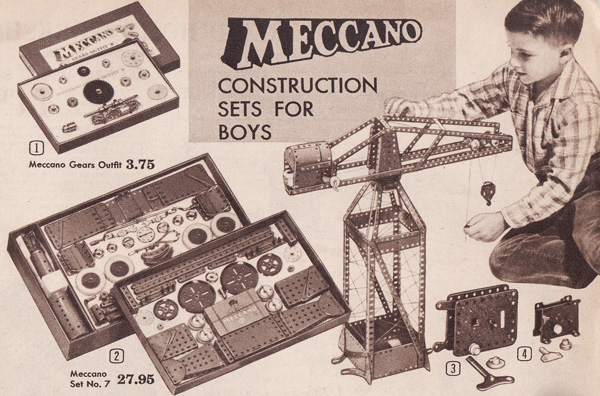 And a new construction toy made its Canadian debut in 1962. A toy that was developed in Denmark, eventually sweeping Europe and then the world. In February 2015, Brand Finance named it the “world’s most powerful brand”. That toy is Lego.

My brother and I were among the first North American children to play with Lego bricks as our Dutch grandparents sent us kits for Christmas for several years running before it became available here in Canada. 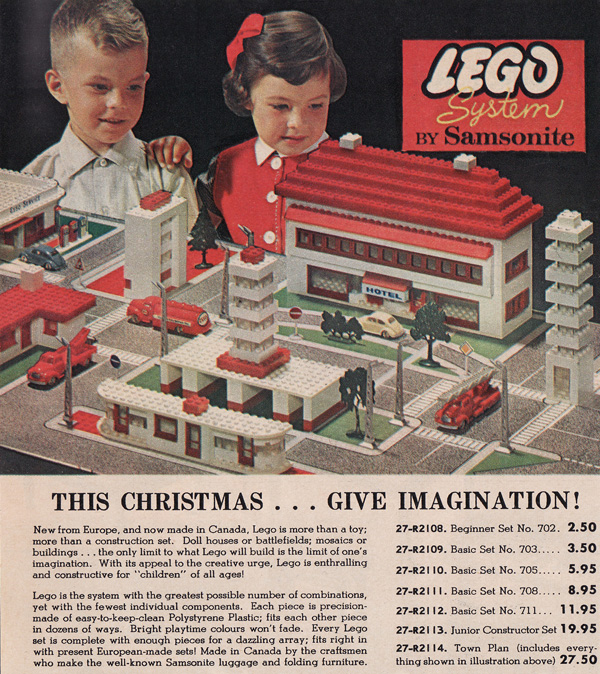 As the blurb in the 1962 Eaton’s Christmas catalogue notes: “New from Europe, and now made in Canada, Lego is more than a toy; more than a construction set.” The only limit to what you can do with it is your imagination. These early kits were licensed by and made by the Samsonite luggage people. The product was so new that the catalogue had a panel explaining it. 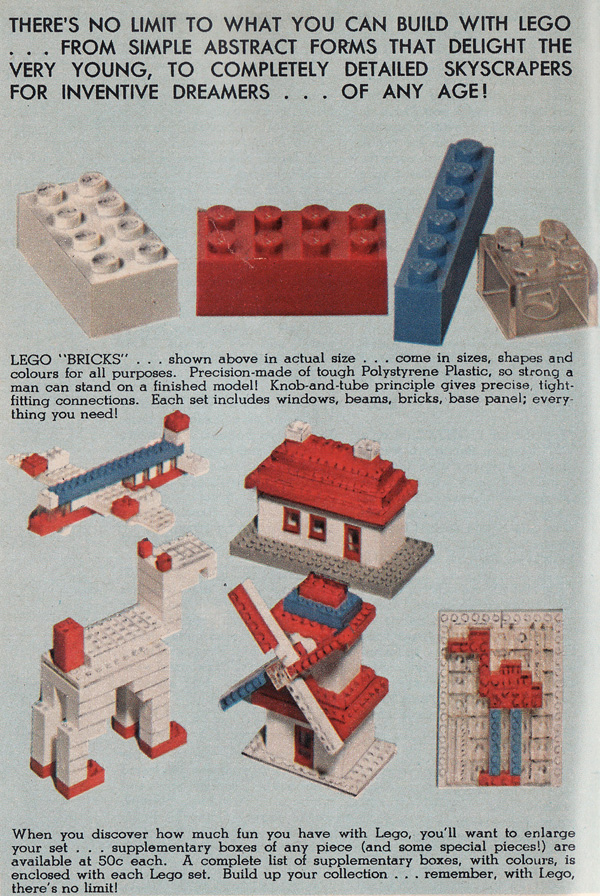 Now the Bay has over 200 different Lego kits ranging from starter kits on sale for $9.74 to $179.99. Many are themed, tied in with popular cultural icons like Star Wars or Marvel or DC comic book legends. Toy mega-store Toys ‘r’ Us has 495 different kits ranging from $3.99 to $399.99 for a Ghostbusters fire house.

Let’s move on to girl’s toys. Not surprisingly, in 1962 toys for girls focused on dolls and domestic play toys like toy kitchens or a toy iron and ironing board. 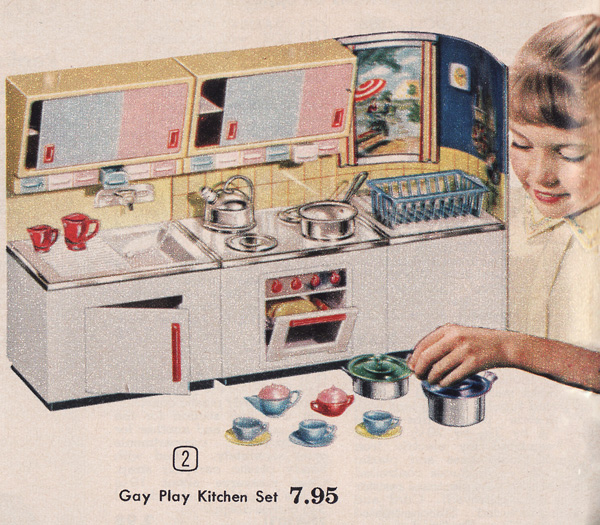 And while the still popular Barbie doll was introduced in 1959, the 1962 Eaton’s Christmas catalogue only had  couple of accessories. Cases at $2.98 each or $24.20 in today’s dollar. 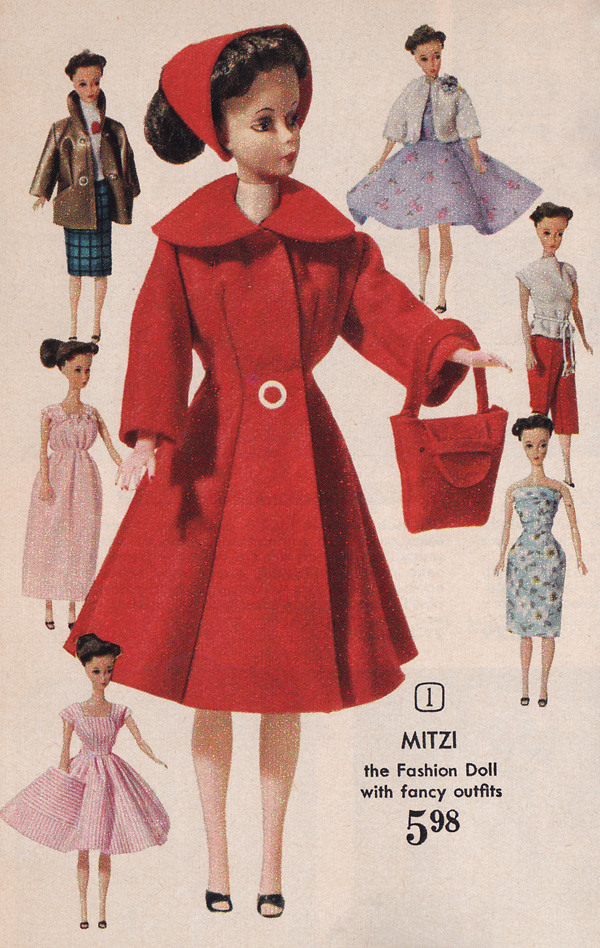 One perennial Eaton’s favorite was always the Eaton Beauty Doll. This was custom made for the Eaton’s company and came out every year around Christmas. 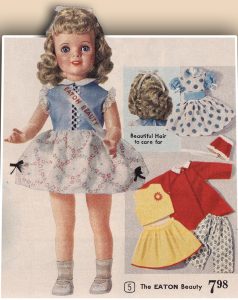 The Eaton Beauty Doll was introduced for the first time in 1900 in various sizes.  At first they were just common dolls for playtime branded as the Eaton Beauty Doll. They sold for $1 to $10 depending on size. The basic $1 doll stood 20 inches tall. Eaton’s maintained that price until 1916.

In 1991 the dolls started coming with a certificate of authenticity. By 1994 they became certified limited edition collectibles and the price was up to $250. My wife was a doll collector in the 1990s and when Eaton’s went bankrupt in 1999, they had a huge clearance sale on all their stock. One of those clearance items was Emilie, the 125th Anniversary Eaton Beauty Doll, a 20 inch tall model like the original with bisque head and articulated limbs. It was from a limited edition of 125 dolls designed by doll maker Vi Pierce. The bankruptcy sale had drastically reduced the price and I snapped one up as  Christmas gift. We conclude with a couple of examples from a two page spread of toys for 98 cents each in the catalogue. That would be $7.96 in today’s dollar.

Additional items from the catalogue