Electronics and high tech consumer goods have changed considerably since 1962. Back in the day, all video was shot on film which later had to be processed. The film and the processing both cost money. By contrast, today, whether you are shooting stills or video, it is all electronic. Everything is recorded on reusable video cards and can be transferred to a computer. You can attach your computer to a television and show all your photos and videos on TV. You can even edit electronically.

Eastman Kodak came out with an inexpensive camera, the Brownie, in 1900. That first one was fairly simple and only cost $1 and was wildly successful. It brought photography to the masses. One of the most popular models was the Brownie 127 which was produced from 1952 to 1967.

The two Brownie cameras shown below from the 1962 Spring and Summer catalogue are both Brownie 127s. The name is derived from the fact that they used 127 film but there were a variety of styles to choose from. 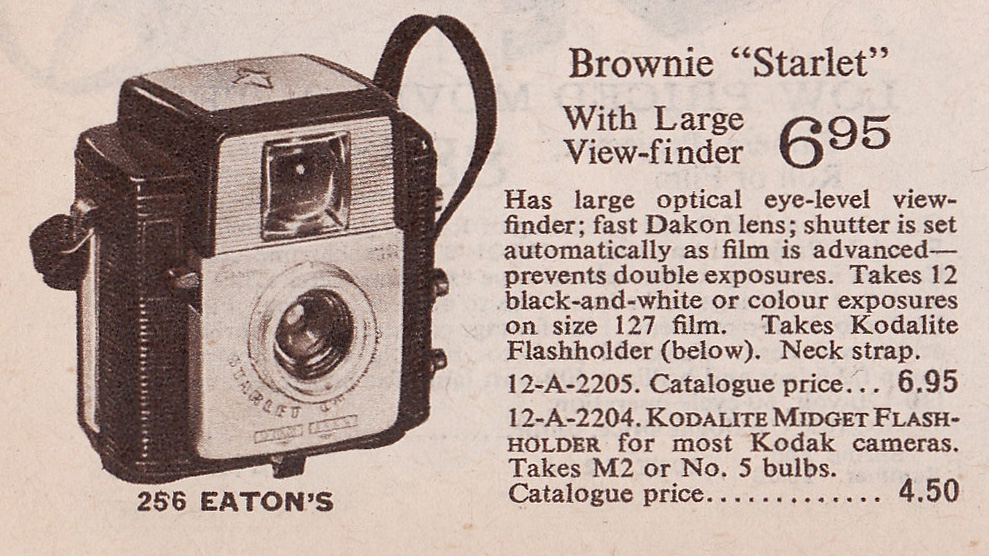 The Brownie “Starlet” shown above retailed for $6.95. In today’s dollar, that would be $56.09. Today you get better quality cameras included with your cell phone. Or you can buy a cheap digital camera from Nikon for as low as $9.99 at Best Buy. 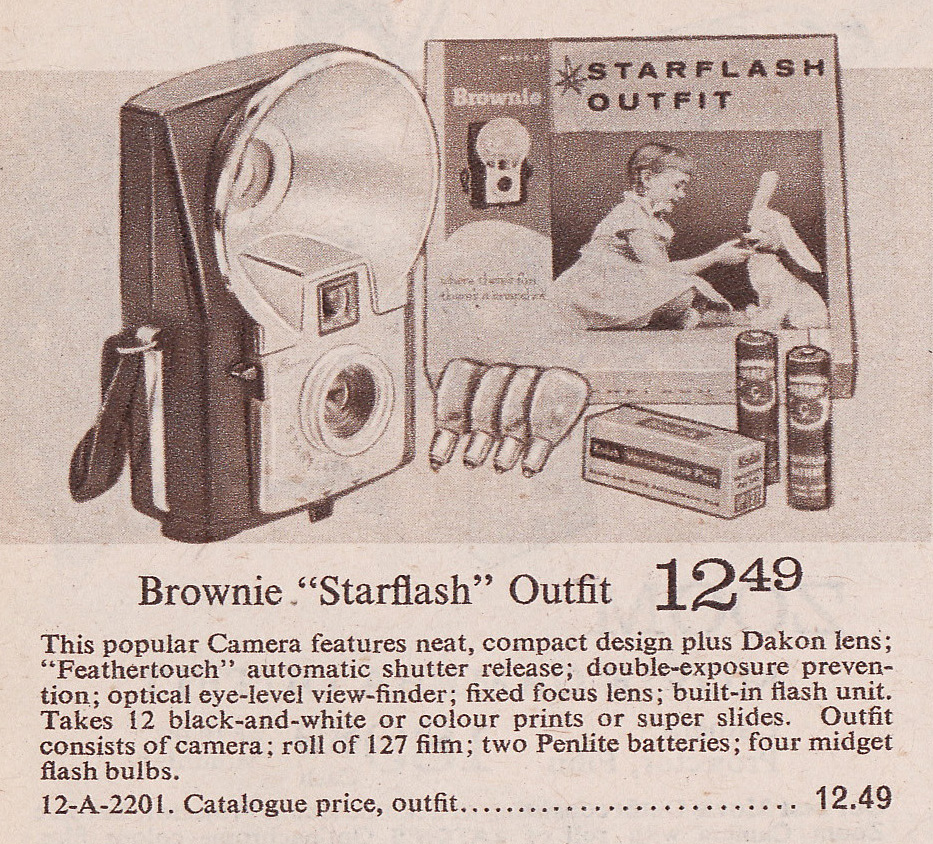 This Brownie “Starflash” was sold as a kit that included four flash bulbs, two batteries and a roll of film, all for just $12.49. In today’s dollars that would be $100.79. 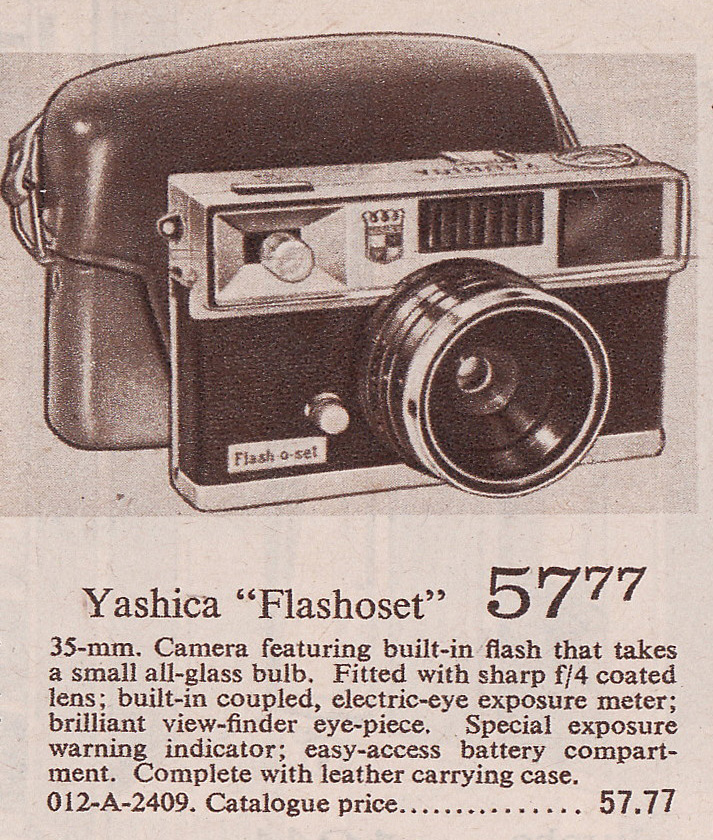 Of course, you could get high end cameras as well in 1962. The Yashica “Flashoset” above used 35 mm film and retailed for $57.77, a hefty $466.20 in today’s dollar. But it was a mid-range camera. You could get an Agfa single lens reflex camera for $129.50 or the equivalent of $1045.06 today. Today you can get high end cameras as well – all digital, of course, though I believe you can get cameras that still use film but they are hard to find.

Today’s digital cameras come in a wide range of prices with the most expensive at Best Buy also a Nikon and selling for $3999.99.

Back in the day, you could get your film developed as prints or, with 35 mm film, you could also get slides. Slides could be put in a projector and shown against a blank wall. The Kodak slide projector below sold for $107.07 or $864.05 in 2016 dollars. 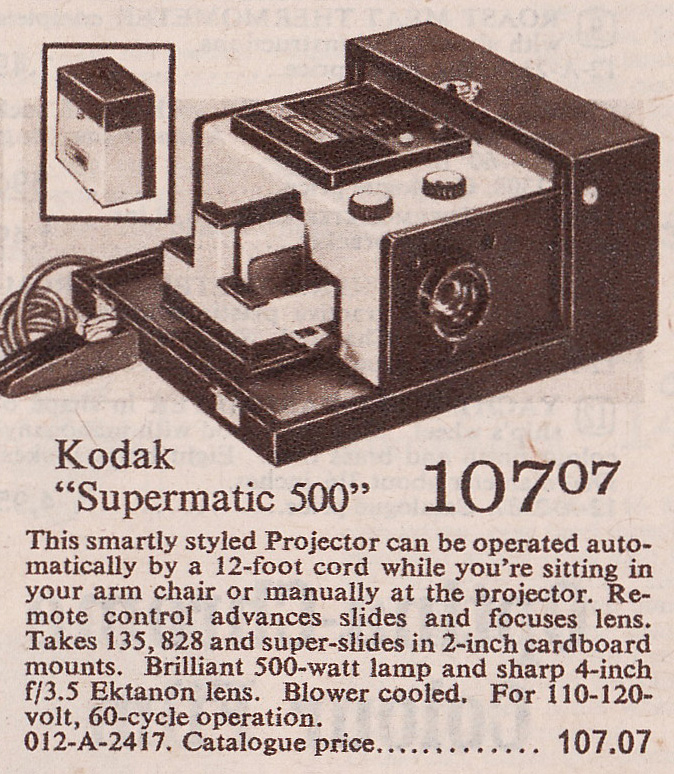 Although the instant camera was developed as early as 1923, Edwin Land is usually credited with its invention in 1948 when he developed the Land Camera which was a huge leap ahead of the earlier version as it had the film itself include the developer. By 1962 it was a huge commercial success. In 2008, the digital revolution killed Polaroid and the company filed for bankruptcy for a second time, closing its last three factories.

We mentioned movie cameras in our first post. One of the cheapest in the 1962 Eaton’s Spring and Summer Catalogue was the Holiday II 8-mm Movie Camera at $44.25 or $357.10 in 2016 dollars. Mansfield Industries, which specialized in low end movie cameras and made the Holiday line among others, no longer exists. 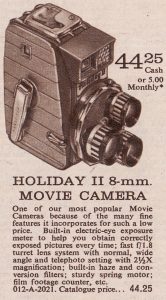 Of course, to show your home movies you needed a projector and Eaton’s sold a variety of these.

We’ll conclude our look at the world of photography in 1962 with accessories. There were a number of film editing and splicing units as well as camera bags, film reels and a monopod. Just multiply the prices by 8.07 to get today’s equivalent. Most of this gear is obsolete now with digital film. 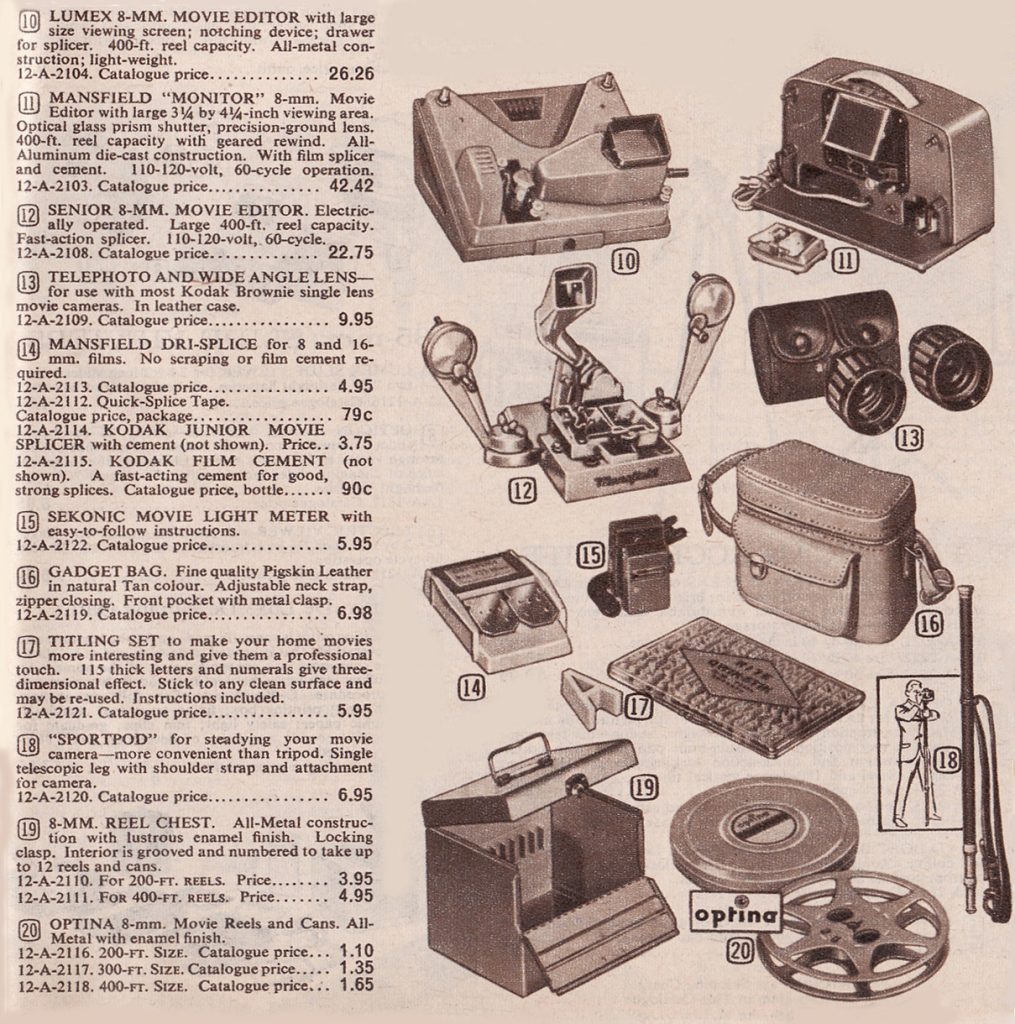